The Tango icon theme's goal is to make applications not seem alien on any desktop. A user running a multiplatform application should not have the impression that the look is unpolished and inconsistent with what he or she is used to. While this isn't about merging styles of all desktop systems, we do aim to not be drastically different on each platform.

Along with a generic type fallback, having a similar style will help in the transition phase with some legacy icons which may still remain on a user's particular desktop. 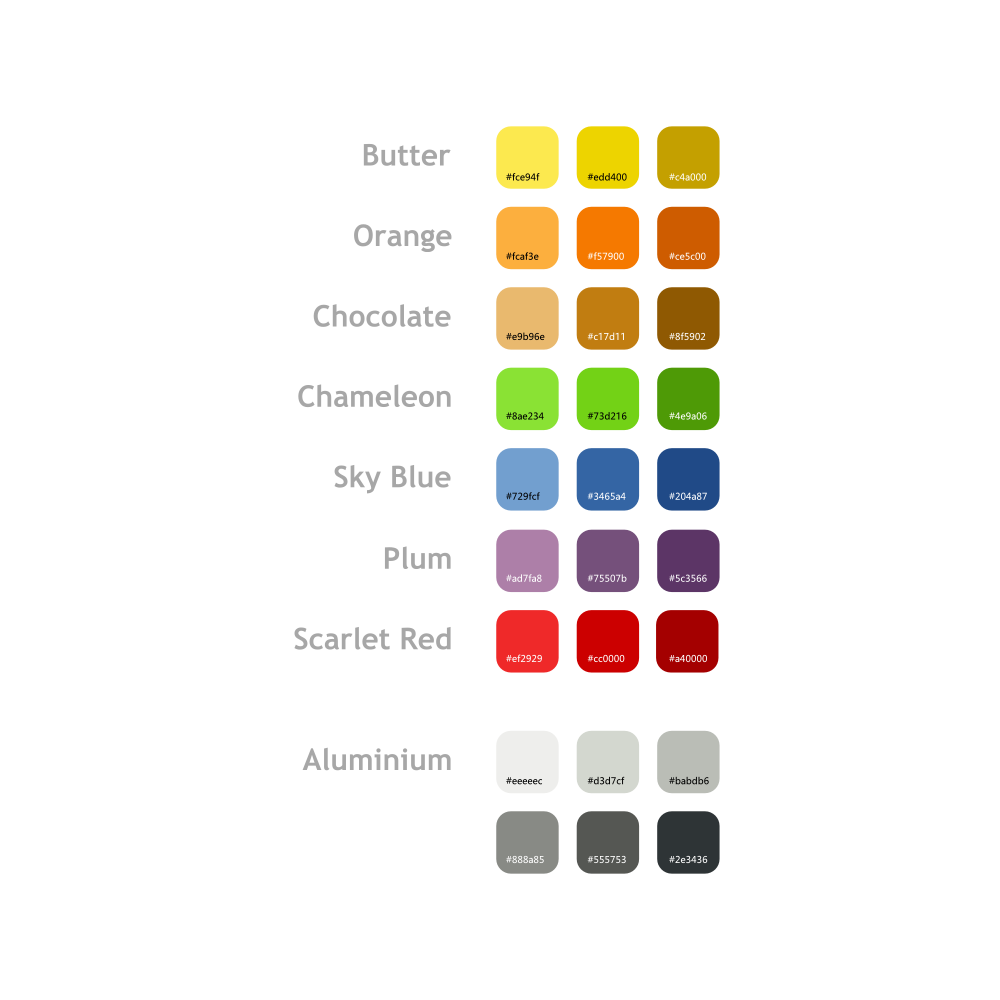 Having a common color palette is required to have a consistent look across all icons. Visual style is heavily influenced by the colors used.

The Tango color palette consists of 27 RGB colors, as shown on the image above. Most desktops allow for 24-bit RGB icons (+8-bit Alpha channel).

The common practice when drawing icons is to use the palette as a base, applying it on large areas. Shading with gradients, creating highlight and shadows by changing value, and minor changes of saturation are also allowed and endorsed. Colors do not have to come exclusively from this set, as additional colors may be used. Starting from the base color and changing value, saturation or even hue slightly gives more consistent results than starting from arbitrary colors.

For your convenience, we prepared the palette for use in the following formats:

Note the latest development version of GIMP and Inkscape 0.44 ship the Tango palette by default.

There are many attributes of an icon that define it as part of Tango, including ones such as perspective and lighting (which are outlined below).

Let's examine at the key visual aspects that define the style:

Various elements have been picked from existing icon styles: Similar perspective as GNOME icons, a colored object stroke from KDE, an Aqua-like highlight influenced by Mac OS X, and edge highlights and overall lightness from the Firefox Pinstripe theme.

To better understand the style of Tango, consider the following adjectives:

There are three types of perspective defined for Tango.

This type of perspective is the most common for application icons. Action/Toolbar icons also utilize this perspective from time to time.

Having homogenous lighting across all icons also is important for visual consistency. Tango icons are lit from above, with the light source slightly to the left. Icons with on the table perspective may cast a fuzzy shadow on the surface as if the light source came from the position of the observer.

There are 4 major icon sizes defined that an icon theme should contain: Large, Medium, Small and Extra Small. Each of these sizes needs to be treated separately, simple scaling of a larger icon doesn't work and ends up looking fuzzy and unclear. On top of that, a new optional size, X-Large, has been introduced.

This size is mainly used for desktop icons and in the file manager views. The bitmap size is 48×48 pixels.

"Small" is the common size for application toolbar icons.

Its bitmap size is 22×22 pixels. This size is common for toolbars in KDE and the GIMP.

Gnome has been using a size of 24×24px (which is ¼ of 48×48); just adding a 1 pixel empty space on all sides can make Tango icons useful on the Gnome desktop. One can easily do this with imagemagick:

At 16×16 pixels, the "Extra Small" size is used in places such as lists (file dialog, message list in an e-mail client, etc.) and menus.

This size has been introduced fairly recently and is optional. Unless you are an experienced icon designer, do not start with this size as it goes against most of the good practice for icon design. You will be required to add insane amounts of detail and might end up with an unclear and complex metaphor. The canvas size is 256x256px and unlike all the other sizes, this artwork can be scaled from 49px up. In other words -- do not aim for pixel perfection here.

This size also holds another exception to the rule of stroking. Do not stroke x-large icons with the 1px common everywhere. In Inkscape we use a trick that achieves a similar contrast enhancing effect without losing upwards scalability. You create an outline object with no fill and a stroke of 3px. Then you duplicate such object and use the copy to clip itself. After blurring the object, the inside of the silhouette gets nicely shaded, while the outside is crisp. Instead of the inner stroke, use path shapes. Blur is a useful tool here as well.

Until now, there has not been a standard for naming conventions. This resulted in themes which have not worked globally, as individual projects have used different names for the same icon.

Tango solves this issue with a Standard Icon Naming Specification

In the short term, existing KDE and GNOME icons names will be addressed using symlinks. We have prepared a script which automatically generates appropriate symlinks for existing naming schemes in GNOME and KDE so that compatibility with current desktop applications will be preserved.

To make it easier for developers to search for icons in the Tango set, please provide keywords in the icon file. For example, appropriate keywords for a joystick icon are: controller, joystick, game, gaming, HID.

For SVG icons, the metainformation is written using the Dublin Core namespace.

Inkscape users can conveniently enter the data in the document properties (Ctrl+Shift+D).

While each artist prefers his or her own way of working, here's a suggestion how to create all the needed icon versions with as little effort as possible.

Here's a few sample videos of a Tango icon creation workflow in Inkscape and GIMP.

Alternatively, you can create the low resolution version in the vector editor as well:

Things to Keep in Mind…

This icon does not have an easily distinguishable silhouette.